Hi, everyone! July robbed August of all of the heat, so it seems we have a mild and rainy August. I’m not complaining. It’s perfect for being outdoors in the city!

The best way to enjoy the festa is to walk around the streets using this map, where you can find all the decorated streets. You can tell that the neighbors spent tons of time, sweat, and dedication and poured their hearts into their streets, making them explode with color.

My family and I went on Sunday, the opening day. The Plaza de la Vila de Gracia was packed with color and warm bodies. Just as we entered, we heard loud cheers to see…. …the construction of a castellers! It’s amazing that the human body can artfully arrange themselves vertically and 99% of the time not tumble all over each other like one hot mess. Steady, steady…don’t scratch that itch…! Well, looky here. It’s Barcelona’s new mayor, Ada Colau, with the best seats in the house, a balcony right in front of the casteller! Bravo! Bravo! It’s the unity, passion, dedication, and endless hours of practice.

‘scuse me, I have something in my eye, too. Meanwhile, on to the decorated streets!

The neighbors of this street put the “art” in Carrer Mozart. The theme was art museum — where framed pieces formed a wall to create an elaborate and busy collage. Picasso in 3D. Take me to the sea this weekend. Carrer Berga. It’s all about the circus — clowns, popcorn, and antics under the big top. Popcorn, who wants popcorn? All of the materials used to decorate the streets are supposed to be used and recycled. Why throw out a good bicycle wheel, anyway? Carrer Ciudad Real. The theme was “Under Construction”, representing a constant state of change in the neighborhood. “We’re constructing the republic.” Is there a draft in here? My favorite street was Carrer Perrill. While it’s not permitted to mention any brands, companies, or interests, you can definitely allude to and imitate them. Avatar, *cough, cough*. I admire the creative use of window shades to make oversized flowers. Someone somewhere in Barcelona is trying to take their siesta. Signs are everywhere asking people to please respect the decorations. Rightfully so!

On this sign, it says 10 penguins were stolen from this pool. And the pool looks like it’s completely vandalized. I hope the mossos esquadra are out to get them. Boo! Carrer Fraternitat. This is an imaginary land called “Wiguonia”, full of giant flowers and carnivorous plants.

Neighbors say the underlying theme is respect for the adornments. If not, you may not escape. 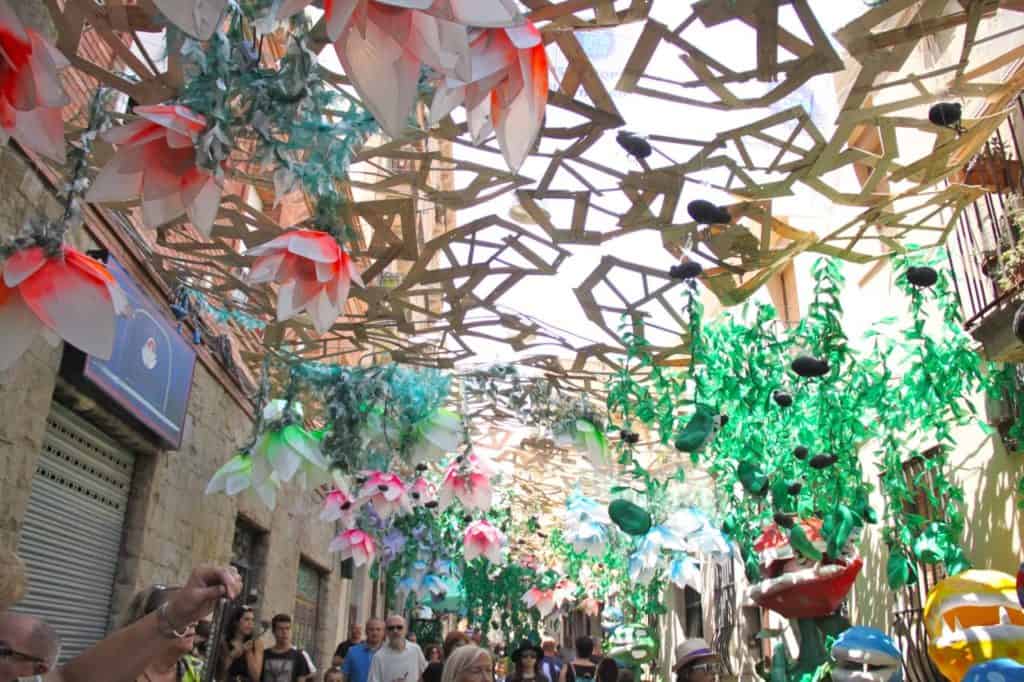 No touchy, touchy, or you know what… Seems you get caught in a human trap. There’s just one day left of the Festa de Gracia 2015, so get your butt over there!

And let me know if you make it!